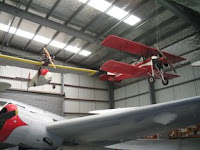 The Gere Sport Biplane was a 30's era homebuilt biplane, designed and built by George "Bud" Gere, who was killed in an accident before he could witness his plane's first flight. Early models used Ford Model T and Model A engines. There are several of these planes still being built and flown around the world.

I have read elsewhere that Bud Gere died of the flu before flying his plane. Elmore Wall was the test pilot on the first flight. I am nearly finished with a Ford Mod.A powered Gere- expect flight test in Spring.Coincidently my name is Wall. Bud Wall, Bouse, AZ.(Not known to be relative of Elmore)

Thanks for the comment, would be great to see a photo or your example for comparison (richardwesley@yahoo.com)