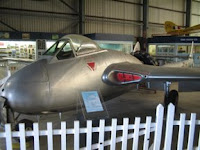 The Vampire jet fighter is a classic of aviation design. Incorporating a wooden fuselage section for the pilot, with the single jet engine mounted between two long tail booms, it is a very unique and distinctive aircraft. The Vampire was the first well known jet aircraft in New Zealand, serving for many years with the Royal New Zealand Air Force, and many still survive on display around the country.

Acquired by the museum very early on in its history (donated 3rd May 1962), the aircraft was on display outside at Motat's Great North Rd site for some years, before moving indoors when the small aviation pavilion was constructed. Here it was a popular sight along side its earlier fighter cousin the Kittyhawk. In 1987 the Vampire was moved to the Meloa Road site beside the Lancaster, where it is still on display right at the main entrance. The Goblin engine which powers the aircraft is displayed on a stand beside the aircraft, along with an even earlier Derwent jet engine which was the power plant for the earlier Meteor jet fighter.


Some other complete airframes that have survived in New Zealand include:

F3 ex RAF, used by RNZAF as instructional airframe
INST167 - Ferrymead was sold this, is it still there?