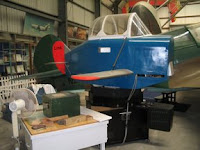 The Link Trainer holds a significant place in aviation history. It was the first true flight simulator, and provided safe training to hundreds of thousands of student pilots during the 1930s and 40s. Using the skills gained working at his father's piano and organ factory, and his own flying experience, Edwin Link designed and built his "pilot trainer" which was patented in 1931. It provided a realistic depiction of flight, and was especially useful in teaching instrument flying. The Link Trainer came into widespread use during the Second World War, with thousands being built for the American, British and Commonwealth air forces. It was a technological marvel at the time of its invention, and its legacy can be seen in modern flight simulators.