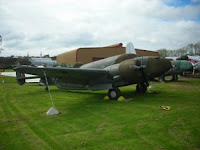 NZ4600 Medium Patrol Bomber 1943 - 1946. This aircraft is the only RNZAF Ventura to survive. It saw service with the USAAF and the RAF before being transferred to the RNZAF in 1943. It was recovered from a farm where it had laid derelict for many years and is now virtually complete internally and externally.

The only record I have of the aircraft is that it was with 4TTS at Nelson in late 1944. Post-war the aircraft was sold to a farmer, Mr Russ, who removed the aircraft to his farm near Nelson. The aircraft was kept largely intact until it was recovered by MoTaT in 1971, and restored by Barrie East. As well as components from NZ4522, the restoration incorporated the tail section from Lodestar ZJ-BJM (c/n2090 ex VH-FAD), a former RAAF aircraft." 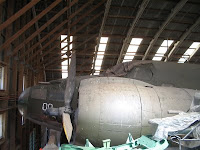 Actually the correct name for the aircraft is 'Lexington' but they seem to only have been known as Ventura's when in RNZAF service. The aircraft were fitted with various armament including a a rear firing turret, ventral position and fixed forward firing machine guns.

This aircraft was on display in the Belfast hanger since the completion of its restoration in the 1980's. In the early 1990's it was lifted by three cranes onto purpose built 3m red steel stands, so as to allow further aircraft to be stored underneath. This also allowed the DC3, Agwagon and Harvard aircraft to be brought inside out of the weather and restoration work begun.

I haven't yet come accross any good YouTube video for a real Ventura, but the linked video shows good footage of a very close cousin, the Lockheed PV-2 Harpoon, which was developed from the original Ventura design: