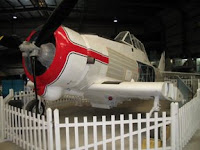 ZK-BPU is a topdresser operated from 1960 to 1969. This agricultural aircraft was designed and built in Australia and is based on the CAC Wirriway trainer which is in turn similar to the well known RNZAF Harvard. It could carry a large load of super phosphate or fertiliser in the hopper in front of the cockpit.

When I started with the museum as a volunteer in 1987 this aircraft was in what was known as the ‘Hudson Workshop’ with its wings stored alongside. We moved it to the side of the workshop as pictured here to allow room for other projects (the Gemini repair being the first) and we only came back to it many years later.

A quick paint job was the idea so as to enable us to move it onto display. Unfortunately this work did not turn out well and the paint (probably due to age) peeled when the markings were reapplied. This then resulted in the aircraft being completely repainted again sometime after 2001 before being placed in the main hanger between the Lancaster and Solent. It is displayed with some side panels removed to expose the interior construction of the aircraft.

There is story on a web bulletin board about there once being another set of Ceres wings at Motat, which were then subsequently scrapped. There is no truth to this, as the wings (port and starboard) of the aircraft have always just been in store waiting for the day that space constraints lift and she can once again spread her wings.


To see this classic ag aircraft along with its stablemate the Airtruk check out this footage from the Tyabb airshow in 2010: