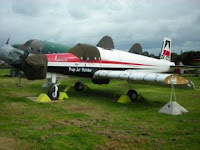 The Fletcher has been used for many years for topdressing operations all around the New Zealand country side. This aircraft, Fletcher Fu-24 ZK-CTZ, was the first Fletcher aircraft fitted with a turbine engine.

After retirement from service it was displayed for many years up on a plinth at the entrance to Hamilton Airport. While aircraft can look impressive displayed this way I personally think that one can never discribe such as airframe as 'preserved'. The weather is always so harsh on an alumiminum structure, that really only replica's, or completely expendable aircraft should be utilised as gate guardians. 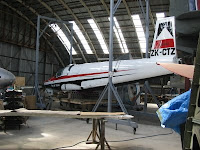 It was purchased by the museum for display in 2005/2006, and was jointly restored by MOTAT and the Waikato Museum of Art and History. In 2007 it was the focal point of a successful Innovation exhibition at the Hamilton museum. 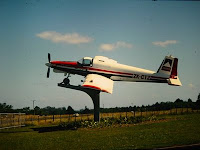 A significant piece of Waikato aviation history will end its days at the Museum of Transport and Technology in Auckland. The first Fletcher topdressing plane that worked out of Hamilton Airport in the 1950s is being restored, after being damaged while on display outside the airport for many years. After its $50,000 restoration the plane will go on display at the Waikato Museum of Art and History before making its final home at Motat. There it will join other historic aviation exhibits including the replica of the plane that Richard Pearse is thought to have flown in 1903, the only Solent Mark IV flying boat left in the world, and one of only a few World War II Avro Lancaster bombers.

The Fletcher, originally modified by aviation pioneer Ossie James, was temporarily at Mystery Creek after being taken down from outside the airport. Years of outside storage and neglect - and a collision with a vehicle at some stage - took a heavy toll on the fragile aluminium skin and frame. Ownership of the Fletcher was transferred from the airport and Mystery Creek to the museum for $5000. Motat will become guardian of the aircraft after the Innovations in Agriculture exhibit finishes at the Waikato Museum next year. - NZPA"