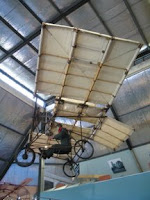 "As a schoolboy, Richard Pearse was obsessed with the idea of flying. He is reported to have read everything he could find about flight and related subjects, to the detriment of his school work, and to have built models of planes and a string-pull helicopter. He wished to become an engineer, but his father insisted that he should take up farming, and gave him a farm at Waitohi, near Temuka, for his 21st birthday. The farm was away from public roads, and enclosed by a gorse hedge which is said to have grown to a height of 12 feet and a width of 22 feet, providing Pearse with privacy from prying eyes.

Pearse used his farmhouse at Waitohi as a workshop, building his aircraft and their engines from parts salvaged from agricultural machinery, supplemented by bamboo and wood. He was not popular with neighbours, since the noise of his machinery disturbed them and their cattle. His attempts to fly were by many seen as sheer madness. Some people were opposed to his attempts to fly on religious grounds, deeming them to be the "work of the devil." Faced with this opposition, Pearse became even more reclusive and secretive about his experiments. 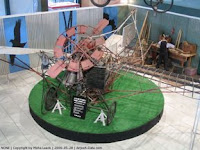 His first aircraft was built over a number of years and flight-tested from 1902. It was a two-cylinder, high wing monoplane with a 25 foot wingspan. The homebuilt engine had a 24 horsepower capacity and weighed less than 5 pounds per horsepower. The body of the craft was built from bamboo rods and was structurally strong. It was supported on a tricycle undercarriage constructed from tubular steel, with a nose wheel and two lateral wheels. Cables were stretched from posts at the front and rear to the wing tips, with wire bracing from the undercarriage outboard of the wheels to the wings. This plane was modified over three or four years as his flying experiments continued. Sections of this aircraft, including the undercarriage, can be seen today in the MOTAT Museum in Auckland. His second aircraft was started about 1907. It had a 40 foot wingspan with a wing loading of less than 1 pound per square foot, but it proved unmanageable.


Between 1909 and 1928, Pearse turned his attention to creating non-flying mechanical devices, such as a power-driven plough fitted with an engine of his own design and manufacture, and a motorcycle using a similar engine to that of his aircraft. He later worked in Christchurch as a house builder, using the proceeds from his house building to finance his inventions. His third and final aircraft was constructed between 1928 and 1947, and can be seen at MOTAT. This "Utiliplane" had an engine whose angle could be changed in pitch so it could be flown vertically upward like a helicopter. It was, however, never flown.

Quoted from http://www.auckland-airport.co.nz/
Posted by Richard Wesley at 04:04