The Avro Lancaster is without doubt the star of the Motat aircraft collection. One of the most famous aircraft of World War II, this large four engine bomber is displayed as a memorial to all those New Zealand airmen who served with Bomber Command over Germany during the dark days of the war.

This particular Lancaster (NX665 Mk VII) was completed in 1945 but was too late to see war service. Instead she passed to the French Navy for service as a maritime patrol aircraft in east Africa and the South Pacific, before being acquired in 1964, at the end of its service life, for New Zealand display, all as a result of the work of a group of dedicated Motat founders. Flown into Whenuipai Air Force Base and placed on display in Auckland, it often had its engines run up in the 1960’s for public enjoyment until maintenance issues became too great. 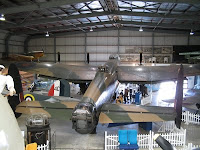 In 1978 it had its outer wings removed for the short move by road to the Motat II aircraft site. Lancaster NX665 sat on display for the next few years in the long grass largely forgotten.

In the 1980’s a group of ex air force personal including both ground and air crew formed a chapter of the Bomber Command Association, and along with Motat gathered the money required for a hanger to house the Lancaster. Following its move indoors, five years of volunteer effort by Bomber Command and the Motat Aviation section were required to repaint and restore the aircraft back to its current condition. 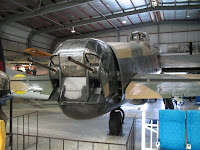 The aircraft's original preservation and then display, and recent restoration at the museum, has many stories and viewpoints. These can be found in various articles (for example one quoted below, another in an excellent booklet printed by Motat). I will try to offer here my viewpoint of its preservation, and stories of the restoration, in the coming months. These are generally from my first hand personal experience of the aircraft, but are all from memory and so may well be flawed, and of course come from my personal viewpoint on aircraft preservation, and my clear basis as a Motat collection supporter. 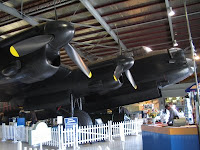 The wing spars were never cut or damaged in any way, though there is perhaps at least one hairline fracture evident on part of the interior visible portion if you know where to look. Also the outer port lifting eyelet was ripped out of the port outer wing at one point, causing the wing to hit the ground and resulting in some minor skin damage to the wing tip (now fully repaired).

(Restoration stories and details to be continued)

The Lancaster has even been a brief TV star on the Billy T James show, a clip of which was on YouTube but has since been removed unfortunately.

Further information and another spin on the Lancaster story can be found in a report by then MOTAT Aviation Curator Bill Rayner:

"At a ceremony in April 2002, the RAF Bomber Command Association (NZ), through chairman and founder, Wing Commander Bill Simpson QSO, DFC (Rtd), formally handed over to Auckland's Museum of Transport and Technology (MOTAT), the restored Avro Lancaster bomber NX665, together with funds for the aircraft's continuing care and protection.

In accepting the aircraft, MOTAT Director John Syme said it was a humbling experience, not just in recognising the sacrifice and courage of the many young New Zealanders who flew with Bomber Command to whom the aircraft was dedicated as a memorial. "It also acknowledges the dedication and commitment over many years of Bill Simpson and his group of volunteer workers in raising the funds for the project, and in providing the physical effort to bring the aircraft back to the pristine condition it is in today," he said.

The hand-over brought to an end an almost forty-year project of preserving the Lancaster which was presented to the people of New Zealand by the French Government in 1964 as a gesture of goodwill, and in recognition of the contribution of New Zealand aviators during World War II. This generous action followed approaches from MOTAT to obtain one of the few remaining operational Lancasters flying with the French Naval Air Arm, L'Aeronavale.

The aircraft was built in 1945 as NX665, a Mark VII, for operations in the Far East, but never saw active service. It was placed in storage until 1951 before being modified and handed over to the French Naval Air Arm in 1952 as WU13. Initially based in France and Morocco, she transferred to Noumea in 1962 for maritime operations in the South Pacific until her final flight to MOTAT in April 1964.

The restoration project at MOTAT brought the aircraft meticulously back to September 1944 RAF configuration, and the aircraft has a dual personality, with two sets of registration letters, to symbolise the integration of New Zealanders amongst the Royal Air Force Bomber Command crews. One side has the Squadron code letters, AA-O, as carried by Lancaster ND752 of 75 Squadron, generally regarded as a New Zealand squadron, and the other, SR-V, the code of Lancaster PB457 of 101 RAF Squadron in which a number of New Zealanders served. Both aircraft were lost on operations. AA-O under the command of Flying Officer Henry John Burtt RNZAF, of Wanganui, shot down in July 1944 on a raid on an oil refinery at Homberg, in the Ruhr, and SR-V, commanded by Flight Lieutenant W W Watt, RAF, over the industrial area at Pforzheim, in February 1945.

For the first twenty years, the aircraft sat outside MOTAT with volunteer activity focused on preservation rather than restoration although she was repainted in RAF colours in 1966. The interest of the Bomber Command group flowed from a re-union of ex-members of the Pathfinder Force of RAF Bomber Command held in Auckland in March 1982 to mark the 40th anniversary of the formation of this special force.

The former commander of Pathfinder Force, Air Vice Marshal D C T Bennett CB, CBE, DSO, visited MOTAT and the Lancaster. Following the reunion, Wing Commander W J Simpson, president of the NZ Pathfinder Association contacted MOTAT expressing the interest of all ex-bomber aircrews in the long-term preservation of the aircraft and offered assistance. Apart from dedicated volunteers who worked on essential maintenance, no proposals existed to complete the costly project of housing, and restoring the aircraft. This led to the Pathfinders launching their "Save The Lancaster" appeal in the hope of giving impetus to the project. With only 90 New Zealand Pathfinders surviving, the appeal was initially low key. However, in 1986, a New Zealand chapter of the Bomber Command Association was formed. It quickly reached a membership of 550, with a reunion the same year attracting 300 ex-airmen and ground crew and 200 wives of whom several had been WAAFs in Bomber Command. A surge of interest in the fund resulted, and with associated fundraising by MOTAT, a hangar for the aircraft was built in 1987.

Once under cover, the restoration and conversion from French naval configuration to the September 1944 RAF aircraft was commenced. The project was virtually fully funded by the Bomber Command group, the work costing $l30,000 excluding donated materials and labour.

Many items were acquired from friendly RAF sources, and all internal and external components were restored to the 1944 state. The aircraft is now regarded as one of the most complete examples of the type left in the world. There was considerable debate with the Museum over the installation of the mid-gun turret. The group felt that this was critical to the memorial concept of the project, it being important that the seventh crew member's role be recognised, and the turret was duly fitted.

The aircraft is now a major MOTAT highlight, and sits surrounded by supporting artefacts and display material including a replica 4000lb 'cookie' bomb, an airfield diorama, and an operations room reflecting a July 1944 night when 1188 bombers flew to six widely separated targets.

In a curious reversal of roles, many items of the French equipment stripped from the aircraft during the restoration are being returned to France to assist with the restoration of her sister ship NX664 which crashed at Wallis Island in the 1960s. This aircraft was recovered by a French group, Ailes Anciennes, in 1985 and is under restoration at Le Bourget, in Paris."


For a picture tour inside the Lancaster see Kiwi Aircraft Images at:
http://www.kiwiaircraftimages.com/lanc.html#tour

Of the 7,377 Lancasters built, there are now only seventeen complete aircraft left in the world. Details of these aircraft can be found on the following websites: 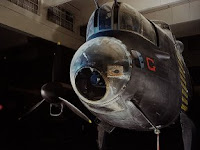 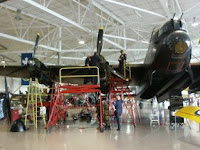 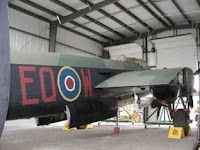 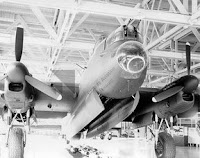 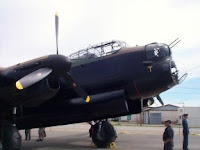 There are also several cockpit sections, replica cockpits and other remains in existence: 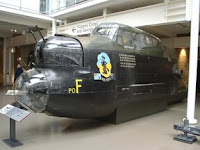 KB994 - No longer a complete fuselage, now split up into parts with some sections going to Kermit Weeks in Florida, & other parts including the cannibalised cockpit section in outdoor storage, UK. 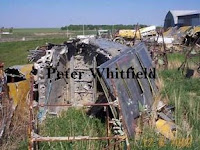 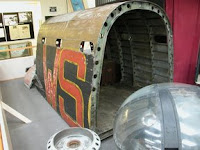 FM221 - Wreckage is still at Resolute Bay where it crashed and sank, North West Territories, Canada

NF920 - Remains only at the very bottom of a sound, Porjus, Sweden
www.warbirdregistry.org/lancregistry/lanc-nf920.html

KB885 - Reported on one site as surviving but was scraped after partial destruction of the cockpit area by fire
www.lancastermuseum.ca/lanckb885.html

Interactive Google Map of Surviving Lancasters Around the World

Thanks for providing useful information..