During my time direct volunteer with the MOTAT aviation section between the late eighties and 2001, I met many people who I believe deserve special mention from me personally. But here I'll only really mention a few by name:

Tom Craill 1921 - 2009
The single person who can be most credited with pulling Motat from the depression and low point of the 1980's to the pathway that in the 1990's has led to much better prospects. Tom put in an unbelievable number of hours of work, not just on-site at the museum every weekend, but also during the week at home, organising and planning.

Ron Wilson
By the longest standing volunteer a the museum and a very quiet and tireless worker. Ron has truly seen it all from the beginning. 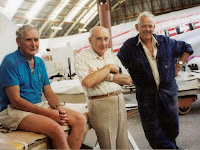 Norm McKelvey
The person who took on the leadership role from Tom and continued the outstanding work of the aviation section. Norm has managed to overseas the completion of a huge list of aircraft including the Ceres, Agwagon, Fox Moth, Airtruk, Tui and Mosquito.

John Ellin
Actually also the father of a friend of mine from university days.

Ray Gasparich
A real leader within the Solent Preservation Society.

I'll also include here the several organisations that worked with and make some comments on their contribution:

New Zealand Bomber Command Association
This group of ex-aircrew members have undertaken a huge amount of work for the preservation of the Motat Lancaster. They were instrumental in ensuring that the hanger to house the aircraft became a reality and created the displays around the aircraft. They also helped with the restoration on Wednesday mornings, when I would join them on school and university holidays. I was honoured when the association made a donation towards my attendance at the Walsh Memorial Scout Flying School.

They, however, do tend to first overestimate the restoration of the Lancaster, which in effect was mainly a repainting exercise, and sadly have never acknowledged the huge amount of work carried out by the 'Sunday Crew' of aviation section volunteers. The fall out I believe really came to a head with two issues. First, removal of original functioning French equipment from the interior, for replacement with WWII equipment. Second, the modification of the fuselage to allow the installation of the mid-upper turret in the more typical location.

Solent Preservation SocietyA very dedicated bunch who like the above group worked hard to first ensure the aircraft a hanger and then put in the man hours to repaint and display this unique aircraft.

This association managed to put together some fantastic displays in the corner of the main display hanger, but at the cost of displaying a very cheap replica swordfish while real aircraft deteriorate outside. Not the smartest choice if you ask me, but I look forward to the Avenger joining this area of the display in the future.

How do I contact you folks? I have a specific interest in the Airtruk PL-12. If there is any way possible I would like to build a 2/3 scale replica of one. Kind Regards, John Hillis e-mail karslikuyu@yahoo.com