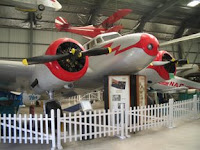 This aircraft represents a major leap in technology for the time. Developed in the 1930's its monoplane design, all metal structure, and sleek stream lined design contrasts with the wood and fabric style of other aircraft of the era.

Eight aircraft eventually operated in New Zealand - seven for Union Airways/NAC and one for Trans Island Airways. The aircraft collection has a complete example of the Electra on display, along with the fuselage of a further aircraft mounted as a cut away display. This fuselage was displayed for a long period at the main MOTAT one site, with the complete aircraft on display outside the Pioneers of Aviation buildings.

ZK-BUT (the MOTAT collections complete aircraft), used by Trans Island Airways, is an L10E (c/n1138). This aircraft was built as an L10A in 1939 as NC21735 for Standard Oil. In 1947 it became N10Y with Creole Petroleum, and was modified to L10E standard. It was imported to New Zealand in 1958, and served with Trans Island Airways as 'Spirit of Tasman Bay'. This service was short lived as the aircraft was ground looped at Harewood (Christchurch) on February 18, 1959 and did not fly again. Used for fire training between 1965 and 1967, the aircraft was passed to the museum in 1968. Today this aircraft is on display in the main hanger, fitted with former Harvard R-1340 engines and painted as L10a ZK-AFD to represent the Union Airways/NAC fleet.

The real ZK-AFD made the last commercial flight on 20 May 1950, then went into storage in the open at Palmerston North, before being sold to Rural Aviation for parts in 1951. A plan to sell ZK-AFD (along with a sister aircraft) overseas was unsuccessful and the aircraft last flew in 1951. ZK-AFD was broken up 1961, but the fuselage survived, and this eventually found its way to Motat, where it was opened up as a 'cutaway' display. Currently this is in storage awaiting display space.

Electras were replaced by larger capacity ex-military Lodestars and DC-3s after the war.