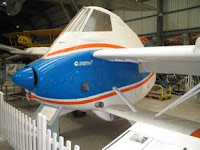 The Transavia PL-12 Airtruk is a single-engine agricultural sesquiplane aircraft designed by Transavia in Australia. The Airtruk is of all metal construction with the cockpit mounted above a tractor engine and short pod fuselage with rear doors. It has twin tail booms with two unconnected tails. Its first flight was in 1965. It has a wingspan of 12.15m and a length of 6.35m and carries up to three passengers. It is powered by one 300 horsepower engine. It has a range of 700 nautical miles (1300 km) at a cruise speed of 101 knots. Its maximum speed is 112 knots and its maximum rate of climb is 344 m/min, with a service ceiling of 10500ft. It has an empty weight of 830 kg and a gross takeoff weight of 1723 kg.

It was developed from the Bennett Airtruck designed in New Zealand by Luigi Pellarini. It has a 1 tonne capacity hopper and is able to ferry two passengers as a topdresser. It can be used as a cargo, ambulance or aerial survey aircraft, and carry one passenger in the top deck and four in the lower deck.

The Airtruk is also sometimes known as the Airtruck. Because the name "Airtruck" was registered by the New Zealand companies Bennett Aviation ltd and Waitomo Aircraft ltd, for their PL-11, Transavia found another name for their PL-12 ("Airtruk").

July 1971 saw the first flight of an improved modelled, the T-300 Skyfarmer, which was powered by a Textron Lycoming IO540 engine. This was followed in 1981 by the T-300A with improved aerodynamics.

The PL-12 was featured in the 1985 movie Mad Max Beyond Thunderdome.

Further Information on the Bennett Airtruk from Wikipedia:

"The PL-11 Airtruck is a New Zealand agricultural aircraft, and a model of the Air Truck is on display at MOTAT.

A strikingly unusual aircraft, the PL-11 Airtruck was designed as a de Havilland Tiger Moth replacement for the New Zealand aerial topdressing market by Luigi Pellarini in 1960 for Waitomo Aircraft.

The prototype was constructed largely from bits of war surplus ex-RNZAF North American Harvards. It featured all aluminium structure, a high wing monoplane with a steel stub wing and V lift struts, steerable tricycle undercarriage, an extremely stubby pod fuselage, the cockpit (made from shortened Harvard glazing) being mounted directly over the radial engine, providing excellent forward view and very high drag, beneath it was room for a superphosphate hopper or up to 5 people in a cabin. The strangeness was completed by twin booms each supporting unconnected tail units, (the idea being a truck could reverse between the tail units to load the hopper).

Despite the outlandish appearance the Airtruck was perhaps surprisingly successful, if unable to compete with the Fletcher Fu24 in its design market. A shortage of Harvard parts lead to the type being redesigned for all new construction, as the Transavia Airtruk, which was mass produced in Australia."

Further information can be found on the MOTAT website at:
http://www.motat.org.nz/explore/objects/transavia-pl12-airtruk