The Motat museum complex is spread over two sites, with the Aviation Collection centred on the Meola Road site otherwise known as the "Sir Keith Park Memorial Aviation Collection". Here is the main aviation display hanger, and the main restoration hanger also known as the "Belfast Hanger". Only one aircraft now remain outdoors, and clear plans are underway to get this aircraft undercover in the very near future.

The new display hanger extension was only completed recently and the final layout of aircraft for display is still in discussion. An early indication is shown here is give an idea of the size of the display hanger and the number of aircraft on display. 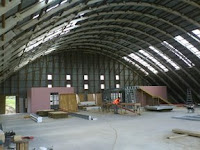 While the first hanger on the Motat II site was the World War Two era "Belfast" hanger relocated from Ardmore airport, the second hanger built really marked a major turning point in the history of the aviation collection. This hanger is generally always reported as being half funded by the Bomber Command Association and half funded by the Fleet Air Air Museum. I am unsure of the exact details or costs at the time, but there was a large amount of donated time and materials by all involved.

The hanger was built around the Avro Lancaster, quite literally, as the aircraft was rolled onto the concrete hanger floor pad the minute the main steel frames had been lifted into place and bolted down. The roof and cladding were then added and the end walls constructed sealing the Lancaster inside. There were never any plans to have opening hanger doors, to some people's disappointment.

Both the Bomber Command Association and the Fleet Air Arm Museum built the first aviation displays on either side of the hanger. The Fleet Air Arm ones were, in fact, their second generation displays relocated from an older Nisson Hut down the back of the Motat II Site. They did have quite a collection of aircraft models, uniforms and other items. The display was also known for its murals and the artist actually has a page detailing these great pictures (http://www.seapainter.com/MOTATMurals.htm). Some of these murals were removed in 2018 to make way for upgraded displays.

The replica swordfish was also part of the Fleet Air Arm display, but is now proudly part of the aviation collection at Tauranga.

The second part of the hanger was built a few years later to house the Solent flying boat and was organised and partially funded by the Solent Preservation Society.