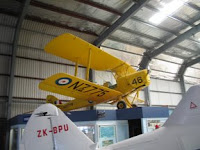 Two examples this famous and important training aircraft are held in the collection of MOTAT. Both are now fully restored and on display in the main hanger.

ZK-AIN (83202/DHNZ25) is displayed in the bright yellow training colours of the RNZAF with the registration NZ775 . It is currently located alongside the Lancaster on top of part of the Bomber Command displays.

The fuselage was built at Cowley and shipped to New Zealand. The remainder of aircraft constructed at Rongotai from local materials. It has British construction number 83202.

Served with BOC Unit 18 Rongotai 25 October 1940, then with No.4 EFTS, Whenuapai from 29 October 1940. Later with No.2 EFTS, Ashburton 1942-1944. Sold to Auckland Aero Club from No.42 Squadron on 30 January 1946 and entered the New Zealand Civil Aircraft Register as ZK-AIN. Then onto the Barr Brothers 29 September 1952 and converted to topdresser. Withdrawn from use at Ardmore during October 1958 and cancelled from the register 18 March 1965. Rebuilt using some parts from ZK-BJH and presented to MOTAT. 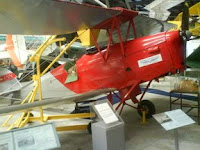 ZK-BAD (84648, T6200, G-AMNF) has been restored and is displayed in top dressing configuration.
Several references to other Tiger Moth parts can be found from various sources. From my understanding many of these parts were in fact connected with the Gerald Rhodes collection when he was involved with Motat in its early days. The two displayed Tiger Moths, along with the Fox Moth are the only parts at Motat, there are no other fuselages or wings stored at the museum.