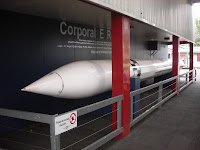 Who would have thought that nuclear free New Zealand would have a tactical nuclear missile on display at a museum, however this is just what you will find with this exhibit at Motat.

The Corporal rocket was the United States first venture into liquid propellant space rockets. Used for the first space probes and as the front line US Army ballistic missile from 1954. This rocket design dates from the late 1940's and is on long term loan to MOTAT from the Smithsonian Institute in Washington. It is currently displayed horizontally beside the main science building at the Great North Road museum site. 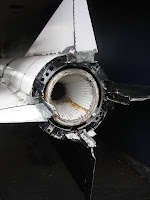 Known as the embryo of the Army missile programs the Corporal Rocket was a surface-to-surface guided missile which could deliver either a nuclear or high-explosive warhead up to a range of 75 nautical miles. The first Corporal battalion was deployed in Europe in 1955. This system remained in the field until 1962-63 when it was replaced by the Sergeant missile system.

The Corporal was basically an artillery round launched vertically and guided in part of its flight by radar. Prior to launch, the radar at the launch site established the target and a beam-rider guidance system was activated and set the missile's ballistic trajectory. Minor course corrections were made by radar which actuated the gyro-controlled refractory graphite exhaust vanes. (The feature of the graphite exhaust vanes were borrowed from World War II V-2 rocket technology.)

The Corporal rocket was on display vertically beside the Walsh Memorial Library and Pioneers of Aviation Pavilion when I first visited the museum as a child in the 1970's and 80's.Weather has certainly had some effect and it is great that it is now under cover.