This aircraft is named ZK-AHO ‘Manu Ruuri’ (c/n 3691) and was in service between 1942 and 1980. Imported by NZ Aerial Mapping Ltd to replace their first aircraft, ‘Manu Ruuri’ has seen and photographed much of NZ during its 7,800 hours in the air. It was retired from service when a wing spar modification was deemed uneconomic. 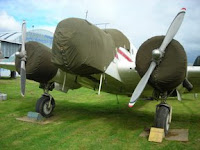 The aircraft is now on display in the main aviation display hanger. You can easily see why it was such a great aircraft for aerial photography work with great visibility out the cockpit and bomb aiming nose windows.

I first got to know this aircraft while it was in the old Belfast hanger and was always impressed at how complete it was. It felt like you could roll this aircraft outside, start her up and fly away. This is really because is was simply retired from flight worthy status to Motat, and so unlike many other aircraft at the museum, it has not needed restoration from many pieces collected from farms and barns. 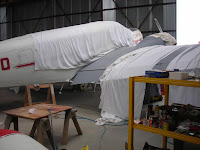 I do remember trying to give the aircraft a good clean soon after I started in 1987 or so. The wings were very yellow around the join lines with some sort of oil. I couldn't get the stuff off for the life of me. I later learnt this was the preservative sprayed inside the wings leaking out. Whatever it was I can certainly say it was effective.

During 2009 this aircraft was located inside the Belfast Hanger undergoing a complete repaint, along with some general maintenance, ready for display in the new main hanger hanger extension. 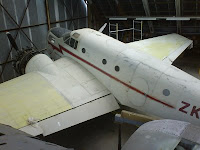 The wing spar of the Model 18 was fabricated by welding an assembly of tubular steel. The configuration of the tubes in combination with drilled holes from aftermarket STC modifications on some of these aircraft have allowed the spar to become susceptible to corrosion and cracking while in service.[18] This prompted the FAA to issue an Airworthiness Directive in 1975, mandating the fitting of a spar strap to some Model 18s. This led, in turn, to the retirement of a large number of STC-modified Model 18s when owners determined the aircraft were worth less than the cost of the modifications. The corrosion on unmodified spars was not a problem, and occurred due to the additional exposed surface area created through the STC hole-drilling process. Further requirements have been mandated by the FAA and other national airworthiness authorities, including regular removal of the spar strap to allow the strap to be checked for cracks and corrosion and the spar to be X-rayed. In Australia, the airworthiness authority has placed a life limit on the airframe, beyond which aircraft are not allowed to fly.

The Beechcraft Model 18 (or "Twin Beech", as it is also known) is a 6- to 11-seat,[2] twin-engined, low-wing, tailwheel light aircraft manufactured by the Beech Aircraft Corporation of Wichita, Kansas. Continuously produced from 1937 to November 1969 (over 32 years, a world record at the time), over 9,000 were built, making it one of the world's most widely used light aircraft. Sold worldwide as a civilian executive, utility, cargo aircraft, and passenger airliner on tailwheels, nosewheels, skis or floats, it was also used as a military aircraft.