This aircraft is one of the most important and historic passenger aircraft in New Zealand. 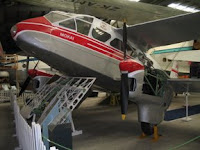 Built in 1938, this aircraft had a varied career. Originally a civil airliner with Cook Strait Airways (named 'Neptune'), it was impressed by the RNZAF in 1939. After serving with the Communications Flight at Rongotai (Wellington), it was sold to Air Travel (NZ) in December, 1944. The aircraft later served with NAC (named 'Mokai'), and carried out its last commercial work with Mt Cook Air Services on the West Coast.

She was flown to Ardmore in 1974, and placed on display. Currently the engine cowlings of the port engine are removed to allow viewing of the 6 cylinder Queen engines. There is also a wing section on display showing the steel tube and wood construction (there are another two port inner wing Rapide sections also in storage at Motat, how there came to be three port sections is a mystery I've never solved?!).