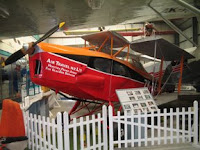 The Fox Moth was a development from the well known and loved Tiger Moth. It incorporated a small passenger cabin forward of the pilot, and incorporated the the same engine and wings as the Tiger Moth.

This aircraft has been restored to represent ZK-AEK and is on display in the main hanger. The real ZK-AEK is still airworthy but now in Canada as CF-YBM. The actual orginal fuselage is that of ZK-APT. There are reports of this fuelage being one of five replica Moth's built, but this is not the case.

There are around seven other Fox Moths in New Zealand, with at least two currently airworthy.

The official information page on Motat's website can be found at:
http://www.motat.org.nz/collections/AviationCollection/FoxMoth.htm