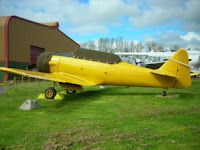 NZ944 was a trainer aircraft from 1941 - 1964. Harvards are perhaps best known and remembered for their rather noisy nature, caused by the propeller tips breaking the sound barrier at high engine revs. This early mark of Harvard was one of the first of the type delivered to the RNZAF for use as advanced trainers. After retirement from flying service it was used as an instruction airframe for the training of aircraft engineers. 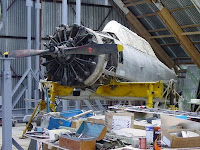 Donated to Motat in the very first years of the museum, this aircraft spent many years on display outside for the enjoyment of visitors, first at Motat I and then at Motat II. Unfortunately limitations on internal display space meant 44 spent many years outside display on the grass alongside the Solent, Sunderland, Lodestar and DC3. This was followed then by another decade in storage inside at the side of the Belfast Hanger.

Luckily though at this stage the Harvard received an extensive restoration under the direction of Norm McKelvey and the aviation section volunteer team. This involved significant repairs to the wings which had been badly affected by the years in long grass outside. The main fuselage received corrosion control and a complete repaint which at time of writing still required markings to be applied. 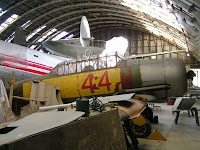 Further information can be found in the log books of the aircraft held by the Walsh Memorial Aviation Library. The extract below by Les Billcliff is quoted from from a online forum:

"This aircraft, a Mk.II, was constructed to Specification N.A.A.1514, according to Contract No. A.96, by North American Aviation Inc., Inglewood. California. The aircraft was not flown by the manufacturer and was certified as being correctly packed 11 March 1941.

NZ944, manufacturer No. 66-2757 was received at No.1 Aircraft Depot on 9 June 1941. After assembly, the aircraft was test flown on 8 July 1941. The following day NZ944 departed on her delivery flight to No.1 Flying Training School (F.T.S.) at Wigram where the aircraft served with the Advanced Training Squadron (A.T.S.). 4 March 1942 saw NZ944 transferred to the Initial Training Squadron (I.T.S.) of No.2 Service Flying Training School (S.F.T.S.) An accident to the aircraft on 4 December 1942 resulted in NZ944 being transferred to the Aircraft Repair Squadron (A.R.S.) until 13 January 1943 for repairs. The A.T.S. used the aircraft for a week before returning it to I.T.S. A complete overhaul was carried out by A.R.S. during March 1943 and once more NZ944 returned to I.T.S. A collision with a fence early in November 1943 (probably the 8th) caused damage to the port wing, requiring the replacement of the aileron, flap and wingtip. 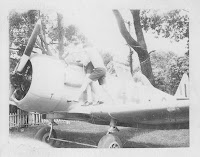 The aircraft continued to serve at I.T.S. undergoing a second overhaul from 13 April 1944 to 25 May 1944, before being allotted to No.1 S.F.T.S. at Wigram on 18 August 1944, where the aircraft served apparently without incident until being placed in short term storage on 22 September 1945. By this time the aircraft had flown a total of 1970.25 hours.