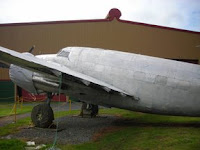 Currently undergoing restoration and therefore stripped of paint, this Lodestar was used as a top dressing aircraft for many years in the New Zealand skys. It has one of the most interesting service histories of any aircraft at MOTAT.

ZK-BVE (c/n 2020) is the oldest of the New Zealand Lodestars. Built as NC25630 for United Airlines, the aircraft was impressed into service by the USAAF (42-53504) and then allocatted to the RAF (as AX756) in September 1941. The aircraft was loaned to BOAC and served as G-AGCN 'Lake Victoria' in East Africa. Later serving with the Spanish Air Force, the aircraft returned to the USA as N9933F.

Purchased by Fieldair in 1958, the aircraft was one of six used by the company for for agricultural work. In 1969 it suffered a hydraulic failure which resulted in a wheels up landing at Palmerston North airport, and was consequently removed from the register in January 1970. ZK-BVE was then retired to MOTAT.