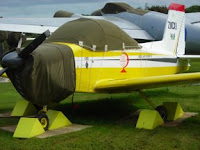 This type of aircraft has been used extensively in New Zealand for basic flight training.

Airtourer ZK-CXU, which was used by Cliff Tait to fly around the world in 1969. It was purchased in 2006 by the museum for permanent preservation and display, and repainted by the volenteer avaiation crew in the colours it wore for the round the world flight. 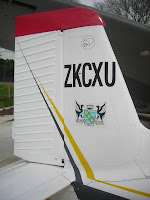 "Flight of the Kiwi Revisited. The Air Force has donated a one man dinghy/liferaft and a life vest to Auckland’s Museum of Transport and Technology (MOTAT). Volunteer worker Mr Cliff Tait wanted the equipment for inclusion in a display at the Museum of the rebuilt Air Tourer AESL he flew around the world in 1969.

Back then the RNZAF donated the same equipment for Mr Tait’s amazing flight, which saw him initially island hopping to Japan.

He had planned to fly via Russia but Cold War sensibilities blocked that route. Fitted with a 115hp Lycoming engine the tiny two-seater Air Tourer was loaded into a container and shipped to Seattle where Mr Tait resumed his flight over the Rockies and the US.

He says the most dangerous part of the journey was the 14-hour flight from Greenland to Iceland when he was heavily overloaded with extra fuel stored in the cockpit. He puts his success down to being taught basic navigation skills and an ability to ‘read the water’.

Mr Tait served in the RNZAF as a Radio Mechanic during 1948-49 and undertook his amazing journey at the age of 37 soon after getting his pilot’s license. ‘I suppose at the time people said it couldn’t be done so I did it.’ Mr Tait, who for many years was Chief Pilot at Aerospace, was keen to showcase the Air Tourer to the world but in those days ‘you just had to get out and sell it’, and that meant literally demonstrating the aircraft’s abilities.

Now approaching 80 years Mr Tait still likes to fly ‘if I can find someone brave enough to fly with me.’

He wrote a book, Flight of the Kiwi about his flight and another Water Under My Wings about his experiences with Air Trainers."