Engines and Other Items

The aviation collection consists of more than just the major aircraft, it also has a collection of aircraft engines as well as many smaller interesting and historic items. Some of my favorites include: 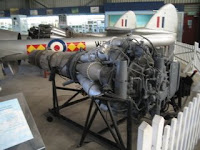 Derwent Meteor Engine - A Meteor jet fighter, serialed NZ6001 made its way to New Zealand for evaluation and display. The only major part of this wonderful aircraft to survive is one of the engines, mounted on a stand constructed from Mosquito engine bearers, with associated engine controls to allow for ground running.

The Gloster Meteor F.III aircraft (EE395) arrived in New Zealand as our first jet aircraft on the 23rd January 1946 as a loan from the RAF. During March, April and May of that year, it was demonstrated throughout New Zealand by Squadron Leader Bob McKay. After the Jet Propulsion Unit formed at Ohakea, some 56 pilots were trained to fly the aircraft. Due to airframe weaknesses, flight speed restrictions were placed on the aircraft and after its last public appearance at the Otago Centennial Air Show at Taieri (21st February 1948) it was placed in long term storage at Ohakea. The RNZAF purchased the aircraft in 1950 for £5000 and it made its final flight in September from Ohakea to Hobsonville, where it became an instructional airframe (INST147). Declared surplus in March 1957 and sold by tender to A. Elliot, Onehunga, in May 1957 and the bulk of the aircraft melted down for scrap.

An article by Bruce Elliott, in issue two of New Zealand Military Style, gives the following account:
"It was sold along with the fuel lines, etc, to a man who lived at Te Papapa. His intention was to mount it on a truck chassis and try for a land speed record along Ninety mile Beach. I remember going to his house with my father; we were invited to see the firing up. The house had a large basement garage where the engine had been mounted with its exhaust end protruding from the doorway. The jet engine started by making a low whine - slowly winding up. Suddenly there was ignition with a sheet of flame out the back, which appeared to be about 20 ft long (6m). It seared the leaves off the fruit trees growing in his back yard leaving only blackened branches. The noise became too loud and the jet was shut down. Fuel went down during this short run like the plug having been pulled from a bath.”

An internet post by another son of A Elliott also confirms the story of how the engine survived to join the collection of Motat:
“I can confirm that one engine was set up and run in a backyard in Captain Springs Road, Te Papapa, Onehunga, the other Derwent was totally dismantled. NZ6001 was fired up at 1TTs Hobsonville and delivered personally to my father by Wing Commander McKay across the airfield to "Rotten Row" where it was dismantled. I still have a few bits, ie Altimeter, Tacho etc. This was the last a/c Dad cut up, previous aircraft were 5 Mosquitoes at Milson originally destined for Rausch Aviation, USA.”

The casing carries a code BT 500 while the manufacturers plate shows serial number 1333 and codes A58 7595 and 12586-9. Along with the Motat engine and the instruments referred to above, the windscreen is also recorded as being preserved with Chris Rudge, Lyttelton, New Zealand. Ashburton Avaiation Museum has also acquired a Meteor jet in 2010 from Australia which will be displayed in the markings of NZ6001. Also note that the serial NZ6001 was reused for the RNZAF Beaver used for Antarctic operations.

Redstone Rocket Engine - this engine which still bears the scars of an actual firing. This type of rocket launched the first Gemini space capsules into orbit. It is on long term loan from the Smithsonian Institute in the USA.

Messerschmitt Bf 109 Prop Hub - An example of this famous type of aircraft was captured in Europe and shipped to New Zealand during WWII. It was on charge with the RNZAF from 1940-1944 and used for fund raising purposes around the country. Only the prop hub still exists to my knowledge, and is currently in storage with Motat. As one of the most interesting and valuable items at the museum I hope it goes on display soon.

DC8 Jet Engine - the main components of this engine are held for eventual display. This engine was received in poor condition from Air New Zealand from an aircraft that crashed on landing during a training exercise. Nobody was injured in the accident, though I think that ANZ is still sensitive about the exibition of this engine and its associated background.

Propeller Collection - an extensive collection of wooden and metal propellers is held by the museum with a selection currently on display in the main hanger.

Various Early Piston Engines - I will try and put together a list and photographs one day of the multitude of engines on display and in storage at Motat. There really is an impressive collection that deserves better display and presentation once further major aircraft work is completed and the main hanger extension is completed.

Avro Lincoln Gun Turret - Donated by the Argentine government to Motat, this complete electrically operated turret is on display beside the Lancaster in the main hanger.

Hi, this is is a very interesting and well designed blog. We are manufacturers, suppliers and exporters of Aerospace lighting components like strob lights from Bangalore, India.
Thanks for sharing.