The Miles M.14 Magister was a British 2-seat monoplane basic trainer aircraft built by the Miles Aircraft for the Royal Air Force and Fleet Air Arm. Affectionately known as the Maggie, the Magister was based on Miles' civilian Hawk Major and Hawk Trainer and was the first monoplane designed specifically as a trainer for the RAF. As a low-wing monoplane, it was an ideal introduction to the Spitfire and Hurricane for new pilots.

The Magister was designed to meet Air Ministry Specification T.40/36P and first flew in March 1937. The design was based on a open-cockpit, low wing cantilever monoplane of spruce structure covered in plywood. The wing centre section has no dihedral and is of constant section with outer sections having dihedral and tapering towards the tip. Split flaps were fitted as standard. The initial M.14 was followed by the definitive Miles M.14A Magister I with a taller rudder, deeper rear fuselage and, eventually, anti-spin strakes on rear fuselage. 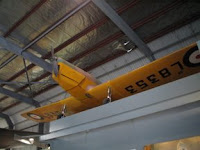 This example was built as a Miles Hawk Trainer Mk111 for the Royal Air Force about September of 1938, and was allocated the RAF serial of L8353 and carried the constructors number of 779. It served during World War Two, including time back with Miles Aircraft during 1940/194. It also flew over 3,500 hours with the 8EFTS (Elementary Flying Training School) during 1943 wearing the code FD-TE, before being demobbed.

It was inducted onto the UK register as G-AMMC, with W A Rollason Ltd in 1953 for export to NZ for the Waitomo Aero Club.

It became ZK-AYW on 18th Nov 1953, and received its New Zealand Certificate of Airworthiness on 3rd Dec 1953. Damaged at Raglan on 22nd Feb 1954, it was repaired and remained with the Club until sold to R G Perry (still at Te Kuiti) on 14th Feb 1961. By July it was with the Piako Aero Club of Matamata until being withdrawn from use on 2nd Sep 1962 with 4,302 flying hours. Its Gipsy Major engine is reported to have gone to the Tiger Moth ZK-DAM some years later.

During the original restoration by MOTAT, parts from ZK-ALO (c/n 332, ex NZ586) were incorporated. This Magister arrived prewar and served with the Otago Aero Club as ZK-AEY before wartime service as NZ586. Postwar it returned to Otago as ZK-ALO and then moved to the Waipawa before arriving at Matamata in 1952. Damaged in a landing accident in 1956, it was then completely written off in a hanger collapse and the remains donated to the museum in 1966.

Displayed for many years beside the Pioneers of Aviation hall at Motat I in its wartime colour scheme as L8353, the Magister was removed from its hanging position and transferred to Motat II in 1987 when the first part new main display hanger was completed.

My very first job under the aviation director of the time Tom Crail, was to cut out and construct some cockpit covers out of sheet aluminium. I didn't have much clue what I was doing but I think I did come up with something adequate to keep out the dust and dirt from the cockpit.

At this time we also gave the underside yellow surfaces a quick spray paint to brighten them up before the aircraft was lifted onto the Fleet Air Arm displays in the front left hand corner of the Lancaster display (we also lifted the bright yellow Tiger Moth onto the roof of the Bomber Command display).

The aircraft was removed from this display location around 2012, and underwent as extensive tidy up and repainting back to it civilian all silver scheme. It was returned to display in the main aviation hall when completed at ground level.

One colour photo of the aircraft has been reported hanging on the wall at a Club House in Te Kuiti.

Survivors
I do not know of any other surviving airframes in New Zealand. There are many survivors in the UK along including an airworthy example with the Shuttleworth collection. Included here are just some well known examples. 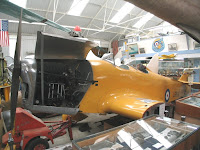 L6906 On display at the Museum of Berkshire Aviation, UK 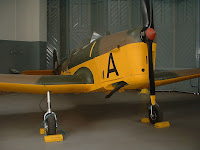 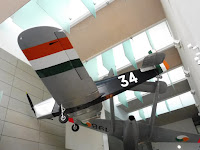