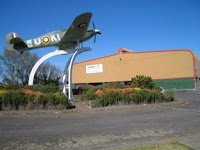 This is a replica aircraft mounted on a plinth at the entrance to the main aircraft collection. It represents the plane flown by Sir Keith Park, in whose memory the MOTAT 2 site is named. It is in fact the second replica aircraft as the first did not do well in the harsh marine climate, subjected to the constant battering of the wind. I believe that the funds for the replacement of this aircraft came from the New Zealand Bomber Command Association. I think that it is one of a number of 'plastic' replica Hurricane's constructed for various museums around the world.

The original Hurricane replica which was on the plinth for many years was built for the 1969 Battle of Britain film and was in fact quite a complex structure, even able to taxi under its own power. I thoroughly enjoyed playing on its remains (or that of the first replica Swordfish, I'm not quite sure) as a child in the early 1980's when it was stored wingless beside a shed before being on sold to a private collector. One wing I seem to remember was very badly damaged, having been torn from the airframe by strong winds.

I am a strong believer that real aircraft should not be used as gate guardians so it is pleasing to see a fine Hurricane replica marking the entrance to Motat. The first film prop Hurricane seems to have found an excellent home now. At Motat, in today's situation, it would have been too interesting to have outside, but not important enough to compete with real airframes for limited inside storage or display space.