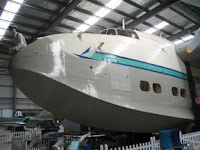 During one of my visits to New Zealand, I went out to MOTAT and, among a lot of other exhibits, was fortunate enough to see this aircraft after the full restoration. They did a great job of it.