The Cessna 188 is a family of light agricultural airplanes produced between 1966 and 1983 by the Cessna Aircraft Company. The Motat example registered in New Zealand as ZK-COO, is currently on display suspended from the ceiling of the main aviation display hanger. 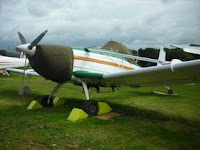 The successful 188 Agwagon agricultural aircraft were Cessna's only purpose designed agplanes. Cessna's Model 188 resulted from extensive research and consultation with agricultural aircraft operators conducted in the early 1960s. The design Cessna settled upon was of the conventional agricultural aircraft arrangement with a braced low wing (unique among Cessna singles) with seating for the pilot only. Like other ag aircraft the chemical hopper is of fibreglass and the rear fuselage is of semi monocoque construction and sealed to reduce the potential for damage from chemical contamination.

Cessna C 188 Agwagon ZK-COO is displayed in the colours of Phoenix Aviation of Gore. It was the second Agwagon to be registered in New Zealand, and was one of a large number of Agwagon's to be imported by Rural Aviation in 1966/67 (34 of them?), and they were nearly all painted in a similar colour scheme to the above but with red and black stripes. ZK-COO was first registered in February 1966 and was withdrawn from use at Ardmore in 1977 and was cancelled in July 1978.

I first knew ZK-COO when it was parked out the back of Motat II by the Sunderland as part of a line of aircraft sitting outside in the weather. During the 1990's the aircraft was bought under cover, but it was not until Norm took over as leader of the aviation section the a full restoration of this aircraft got underway. 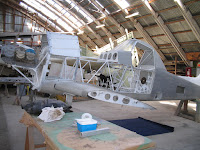 The aircraft was stripped down the steel frame, sand blasted and repainted. An engine and propeller were obtained and fitted and slowly the entire aircraft restored and repainted. The wings were painted stripped, checked for corrosion, repaired where necessary, and repainted. All of this undertaken by volunteers working on Wednesdays and Sundays. The result has been excellent. 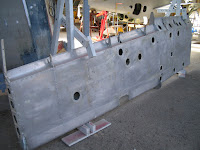 The aircraft was then placed on display in the main hanger beside the Solent for some time before being moved outside while the new aviation building completed. It was then suspended from the ceiling for display.

ZK-COO is a great part of a fleet of topdressing aircraft in the Motat collection including other classics such as the Fletcher, Airtruk and Tiger Moth.


Youtube video of an Agwagon, similar to the Motat example, in closeup and in action.

Very nice writeup on this popular Cessna workhorse. This provided a livelihood for several generations of families, and likely more to come as it is still popular and in service here in America.

My Dad started a small cropdusting and flying service here in Montana in the 70's and owes much of his success to the reliable Piper Pawnee (analogous to the Cessna 188 series) made from 1959-81, and various Cessna AgTruck's he used. This aircraft also has application in small-scale fire fighting. Your aircraft museum does a commendable job, to give credit to such popular working aircraft (some think these to be less exciting), but a the performance and quick handling of these rivals many aerobatic-specific airplanes.

I hope to visit your aircraft museum one day. Keep up the fine work.